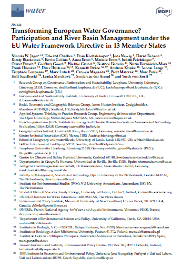 ABSTRACT: The European Union (EU) Water Framework Directive (WFD) requires EU member states to produce and implement river basin management plans, which are to be designed and updated via participatory processes that inform, consult with, and actively involve all interested stakeholders. The assumption of the European Commission is that stakeholder participation, and institutional adaptation and procedural innovation to facilitate it, are essential to the effectiveness of river basin planning and, ultimately, the environmental impact of the Directive. We analyzed official documents and the WFD literature to compare implementation of the Directive in EU member states in the initial WFD planning phase (2000–2009). Examining the development of participatory approaches to river basin management planning, we consider the extent of transformation in EU water governance over the period. Employing a mixed quantitative and qualitative approach, we map the implementation “trajectories” of 13 member states, and then provide a detailed examination of shifts in river basin planning and participation in four member states (Germany, Sweden, Poland and France) to illustrate the diversity of institutional approaches observed. We identify a general tendency towards increased, yet circumscribed, stakeholder participation in river basin management in the member states examined, alongside clear continuities in terms of their respective pre-WFD institutional and procedural arrangements. Overall, the WFD has driven a highly uneven shift to river basin-level planning among the member states, and instigated a range of efforts to institutionalize stakeholder involvement—often through the establishment of advisory groups to bring organized stakeholders into the planning process.