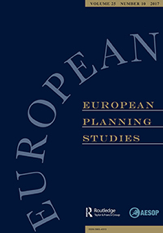 Contribution of Local Agenda 21 to Practical Implementation of Sustainable Development: The Case of the Czech Republic

ABSTRACT: Local Agenda 21 (LA21), a voluntary tool for implementing sustainable development (SD) in local level, is one way of implementing sustainability principles in practice. Twenty years after the United Nations Conference on Environment and Development Conference in Rio de Janeiro, which made the first reference of LA21 (intended as a framework for the twenty-first century respecting SD principles), this article deals with evaluating the real contribution of this initiative to the implementation of SD in practice on the example of selected municipalities in the Czech Republic. This contribution is examined by a comparative analysis of the indices of change in selected indicators (three to four indicators for each pillar of SD) for municipalities involved in the LA21 initiative in comparison with reference municipalities, which have not been involved in LA21 so far. The analysis results indicate that different trends in some of the indicators can be observed in municipalities implementing LA21 and in the others. This applies, in particular, to the environmental indicators (such as the degree of waste separation, indicating in part the degree of environmental awareness), but also to some of the economic ones (municipal capital expenditures indicating investment activity).